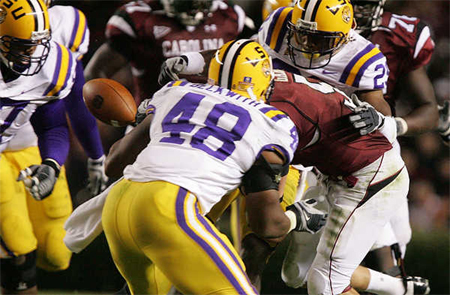 There was a level on which you knew, if you were a South Carolina fan, that this was going to happen. The 17-point outburst in the second quarter of the Gamcocks' match-up with LSU was going to fall short, the dream that Steve Spurrier would once again prove his relevance would fade away and the thought that 2008 could be anything more than a solid, eight-win season -- a nine-win year, or even the first 10-win season since 1984? -- would be dealt its final, cruel blow.

It happened early in the fourth quarter, when LSU took over at its own 17-yard line and launched an 11-play, 83-yard drive that ate up 6:24 of clock and ended with Charles Scott pounding the ball in from two yards out. It was, you knew, all but officially over. LSU was going to win, South Carolina would suffer its latest heartbreak under Spurrier, and it was back to playing for a bowl in Atlanta or, with luck, Tampa.

The Gamecocks' grasp on the lead was always tenuous. The mind-boggling statistic of the game was the 39 yards gained by South Carolina's rushing attack, 15 of those from QB Stephen Garcia. The Bayou Bengals, meanwhile, ground out 164 yards rushing to complement LSU's efficient quarterbacks. The running game came in handy late in the fourth, when the Tigers took over with 3:57 left on the clock after a Garcia interception. Keiland Williams ran for 37 yards on seven carries, Charles Scott also carried once for four yards, and LSU bled the clock dry.

For LSU, this was the definitive statement that they were not out of the SEC West picture after the previous Saturday's drubbing in Gainesville and that Alabama will still have to play for the division title when they roll into Baton Rouge Nov. 8. For South Carolina, it was a reminder that as far as the Gamecocks have come, they are still at best the third-best team in their division. One night, they might win a close-fought game against LSU. But it'll be awhile -- South Carolina next plays LSU in 2012.

NOT THIS TIME
Georgia 24, Vanderbilt 14

Vanderbilt is also used to losing these games, and their match with Georgia was probably over even when Dawgs K Blair Walsh missed a field goal with 2:50 left in the fourth quarter. Sure, they were only a touchdown behind, but this is not a passing team -- Mackenzi Adams or no -- and the Commodores hadn't really sustained a drive since late in the second quarter.

On paper, anyway, Vanderbilt was practically run out of Sanford Stadium. As in, 231 rushing yards racked up by Georgia en route to a 425-245 advantage in yardage. Knowshon Moreno, who ran for 172 yards on 23 carries (7.5 ypc), probably put himself in the lead spot for the SEC's Heism@n candidacy, given Tim Tebow's perception problem and Charles Scott's falling production. 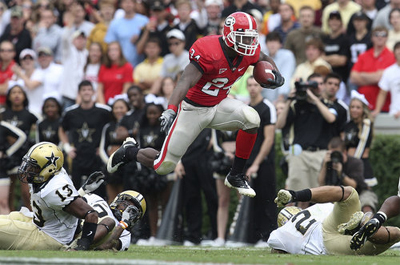 All he needed was to go back to the red jerseys.

Georgia, though, seems to be one of two SEC title contenders that just can't put inferior teams away. (More on that later.) The Dawgs have yet to beat a BCS team by more than 17 points, and that was against Arizona State. When your foes are South Carolina, Tennessee and Vanderbilt, you can live with a statistical blowout and a close score. LSU and Florida won't be so kind.

The other SEC contender that can't put underdogs away would be Alabama. And this week's game followed a familiar formula; the Crimson Tide took a 24-3 lead into the locker room, let it become a 24-10 lead by the end of the third quarter, and ended up escaping with a four-point margin. What, exactly, does that say about the Tide, who pulverized Clemson and Georgia to key the national title buzz and haven't really impressed since?

After all, it took the Rebels about five and a half minutes to make a cakewalk a nail-biter, and the game wasn't really over until an Ole Miss incompletion on 4th-and-5 at the Bama 43 with 1:01 left. Ole Miss might be, as Year 2 likes to call them, the best 3-4 team in the country -- but it's still a team that the Next Great Alabama Champions should be able to handle with ease. They didn't.

Again, this is all well and good when the Tide plays Kentucky and the Rebels. But LSU, or even a nothing-to-lose Tennessee team, would love nothing more than a late-game opportunity to knock Alabama out of the BCS picture.

PHIL FULMER HAS A JOB -- FOR NOW
Tennessee 34, Mississippi State 3

Not since South Carolina defeated N.C. State back on the first night of the season has there been such a deceptive score. In fact, the Vols' "blowout" might be even less impressive than the Gamecocks' margin over the Wolfpack; Tennessee added 21 points in the fourth quarter, 14 of them the direct result of Bulldog turnovers, to put a once-close game out of reach.

We'll deal more with Sylvester Croom's somewhat bizarre play-calling later, in Theorems and Stratagems of the Game. Suffice it to say, Tyson Lee is not Tom Brady, and that sentence should really never need to be written.

But the Vols might have found something in Lennon Creer, who is not a former member of the Weather Underground but a running back who carried the ball 12 times for 51 yards on Tennessee's final scoring drive. The only other players to touch the ball during that drive were the center who snapped the ball and Nick Stephens as he handed it to Creer.

Fulmer keeps his job, if only for another week. So much for the magical powers of CROOM.

Eventually, when you have to rally late to beat Western Illinois and Louisiana-Monroe, you know the karma's going to catch up. For the Arkansas Razorbacks, who might have thought around halftime Saturday that their season was salvagable, that moment came later that night.

Kentucky looked dead after a 14-0 first half for Arkansas. Then again when UK QB Mike Hartline threw a deep pass to Ramon Broadway, who is notably not a member of the Wildcats, ending a drive that had moved near midfield with 5:45 left.

But Arkansas fumbled on the next play, Hartline completed two straight passes covering 41 yards for a touchdown to make the score 20-14, and Arkansas could manage only a three-and-out that actually lost five yards. When Kentucky took over with 2:50 left, it was only a matter of time: two more passes, and it was 21-20 Wildcats. The hero of the night was Randall Cobb, purportedly a quarterback, who caught both touchdowns on 32- and 21-yard strikes.

For Arkansas, this was a back-breaker. They might -- might -- be favored against Mississippi State on Nov. 22; even the Tulsa game, which probably looked like a good idea when it was scheduled, is a likely loss. For Kentucky, now 5-2, the dreams of a bowl are beginning to look more and more like reality: Two more likely wins remain, and the prospects for a victory over Vanderbilt have brightened considerably.

Saturday night, the Wildcats made a comeback beyond the scoreboard.