Share All sharing options for: The SEC and the pros -- no, not the NFL 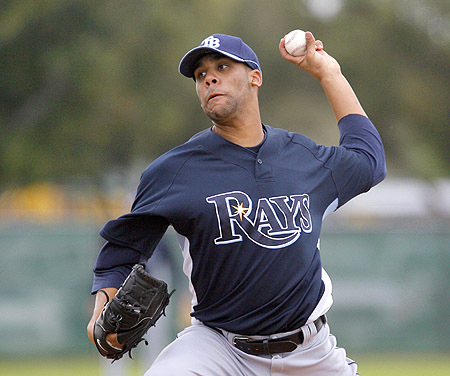 A personal story, if you will:

On May 9, I was in Florida on vacation and went about 90 minutes out of my way to attend a Tampa Bay Rays game. When I was first planning on going to Florida, this was merely to go to a baseball game and cross another major league city off my list. (I plan to go to all of them, if possible.) I also wanted a chance to go see the Los Angeles Angels of Anaheim Located in California Which is One of the 50 United States. No one imagined that the Rays would be, you know, good; they hadn't had a winning season (or anything close) in their 10 years of existence.

So I went, and entered the stadium just in time to see Carl Crawford make a great catch. The rest of the game was just exciting: a pitching duel that finally ended when Evan Longoria, recently brought up from the minors, hit his first walk-off home run -- a two-run shot -- to win the game in the bottom of the 9th. It was about this time that you began to sense there was something special about this Rays team, and I became a fan. Fair weather? Perhaps, but I was also willing to continue to root for the Rays as my AL team even if they continued to turn in 90-loss seasons; as a Cubs fan, I have some experience in that.

Well, the Rays didn't lose 90 games this season; they won 97 in the regular season, went to the playoffs as AL East champions and advanced to the American League Championship Series against the Red Sox.

On Sunday evening, I watched as David Price, a former Vanderbilt Commodore, took the mound for the first save opportunity of his MLB career with the Rays up 3-1. That would be in Game 7 of the ALCS, facing one of the toughest lineups in baseball and the reigning World Series champions. Price walked the first man he faced, then issued two strikeouts and induced a inning-, game- and series-ended groundout.

He was not the only former SEC player in the ALCS: Gabe Gross of the Rays went to Auburn; conference alums on the Boston roster include ubercloser Jonathan Papelbon of Mississippi State, Paul Byrd of LSU and David Ross of Florida.

Just a reminder, as we're in the middle of the football season, that the SEC's clout is felt in sports outside the NFL. It will be felt in the World Series -- Philadelphia midseason pitching acquisition Joe Blanton of Kentucky is scheduled to start Game 4, and Price is a good bet to see more late-game situations. Gross will play some right field for Tampa Bay.

So congratulations to the Rays, and particularly to their SEC alums. And I'll be waiting and cheering for the first title in Tampa history.