The East is Wide Open. Only It Isn't.

Share All sharing options for: The East is Wide Open. Only It Isn't.

It would be tempting to say that the upsets in Athens and Gainesville this past weekend have put the SEC East back into play. It would be tempting to write about how the improbable losses by the frontrunners suddenly made the division more than a race between Florida and Georgia to see who can win the World's Largest Outdoor Cocktail Party.

It would be tempting, but it would also be wrong. By losing on the same weekend, and watching Tennessee self-destruct in front of an Auburn so dazed by the spectacle that the Tigers almost forgot to score, the two contenders essentially ensured that their Nov. 1 tilt remains the most important game on the SEC East calendar.

We must, after all, remember the other would-be contestants in the division race. And for the moment, none of them look ready to take on the Gators or the Dawgs.

Striking South Carolina and Tennessee should be self-explanatory. Both of them left their offenses back in 2007 and haven't bothered to retrieve them. If the Gamecocks have looked bad when they had the ball in their hands -- and, trust me, they have -- the Vols have looked even worse. The only major offensive category in which either of them cracks the top 50? Rushing offense, where Tennessee is 49th. 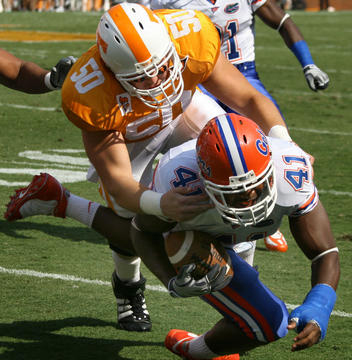 The Clawfense in action. Yes, the Florida player has the ball. No, that's not ideal.

Both are 0-2 in the conference and would have to run the table while one of the major powers loses two more conference games. Georgia losing two more would nullify its tie-breaker with South Carolina; Florida suffering a pair of additional defeats would revive the Vols' hopes.

Didn't Tennessee dig itself out of a similar hole last year? No, not really. Yes, the Vols started out 1-2. But their worst conference mark was 0-1. After losing the conference opener to Florida, the Vols would never again fall below .500 in the SEC. This is completely aside from the question of whether lightning can truly strike twice; three of the Vols' last four SEC wins in 2007 involved a crucial missed FG by their opponent late in the game.

Kentucky is a suitable wild card candidate, except that no one really expects the Wildcats to continue playing as well as they have -- or at least look as good as they do -- once they hit the SEC slate.

Which brings us to the curious case of Vanderbilt. The 'Dores, in case you haven't heard, are 2-0 in conference play heading into this weekend's clash with Auburn and lead the East. Gameday is coming to Nashville(!) and the SEC's attention is focused on this game. And while Vanderbilt could very well win that game -- yes, the Auburn offense is also that bad -- it's hard to see the Commodores actually winning the East.

Not because this would almost certainly be a harbinger of the End Times, though there's that. And not because Vanderbilt has generated less total offense than South Carolina or Tennessee -- though there is also that. Traditional lightweights have made a habit over the last few years of rising up to contend for conference crowns, and Vandy's rushing numbers are respectable enough.

Vanderbilt ranks No. 1 in only one major statistical category, and it's not one you can build your team around. It's turnover margin. The Commodores are taking the ball away from opponents, or having it handed to them, an average of 2.25 times per game more than the opponent.

Is it possible? Sure. Look at Georgia's schedule. Vanderbilt is sandwiched between Tennessee on one side and LSU and Florida on the other; the perfect position for a "trap" game. The 'Dores played Georgia to the wire last year and beat them in 2006. Vanderbilt plays Mississippi State the week before going to Athens. This is functionally a bye week.

And Vandy misses LSU and Alabama this year. So if they get by Auburn and if they upset Georgia and if Florida loses somewhere else along the way... 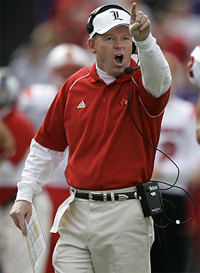 And if he's still the head coach at Louisville Atlanta Arkansas at year's end...

Yes, Vanderbilt is Vanderbilt, and we all know what's supposed to happen. Somehow, the 'Dores will manage to turn this golden oppportunity into a 5-7 season, because that's what they do in the Bobby Johnson Era.

But they are the only suitable challengers left to Georgia and Florida, unless we're all missing something about Kentucky. Either Vandy turns out to be the dark horse this year, or the East's representative in the SEC Championship Game will be one of the two teams playing in Jacksonville on Nov. 1. Just like we thought.