Is it that bad?: Ranking the SEC's Quarterbacks and/or Quarterback Situations

Share All sharing options for: Is it that bad?: Ranking the SEC's Quarterbacks and/or Quarterback Situations 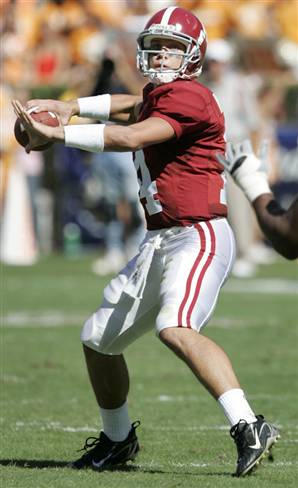 That's right: this guy is one of the SEC's best. Sorry.

Hi, Team Speed Kills readers. My name is Jerry, I write an Auburn blog, and I'm a fan of the SEC.

And so, like the rest of you, over the first half of the 2008 season I've gotten a little tired of hearing about the Big 12's oh-so-fabulous quarterback collection. It's all "Sam Bradford, Heisman candidate" this and "Colt McCoy is the new Tebow" that and "Holy crap, that dude from Baylor went 21-of-24 for 278 and two TDs with no picks last weekend, sweet merciful heavens" and whatnot. Sure, it all sounds great, but can a league that plays the sort of defense the 1980s WAC recently called "unforgivably soft" really hold up to the standard of quarterbacking in our beloved SEC?

Well, actually, yeah. It can. But is the gap really as wide as we're led to believe? I've ranked the SEC's 12 quarterbacks and/or quarterback situations below, in the hopes we can get a better feel for where exactly the state of quarterbacking stands in the SEC right now and how it might or might not measure up to all those fancy-schmancy Big 12 QBs with their "high completion percentages" and "touchdowns." So without further ado:

1. Tim Tebow, Florida. (Numbers: 62.4 completion percentage, 1235 yards, 8.3 yards-per-attempt, 10-1 TD-INT ratio, 152.86 rating; 179 yards and 3 TDs rushing.) No, he's probably not moving into Archie Griffin's two-Heisman penthouse at the end of the season. Ole Miss stuffing the Tebow Child's bread-and-butter smash play with the game on the line was as good a sign as any that as good as Tebow is, the 20-20 magic of a year ago is gone.

That said: he's still the best all-around quarterback in the SEC. Tim Tebow is still the once-in-a-lifetime version of Owen Schmitt where Owen Schmitt has one of his arms replaced with a cybernetic robot arm that allows him to tote a 10-1 touchdown-to-interception ratio and the league's best efficiency rating into the season's second half. The likes of Tim Tebow shall not pass college football's way again anytime soon, methinks.

2. Matt Stafford, Georgia. (Numbers: 61.7 CP, 1503 yds, 8.4 YPA, 8-3 TD-INT, 143.15 rating.) The league's best (only?) pro prospect by a country mile, save for one poor half against Alabama and a couple of missteps against Tennessee Stafford has continued his steady, inexorable ascent from rocket-armed-but-mistake-prone freshman to rocket-armed-and-chillingly-efficient protoquarterback. The SEC's best-thrown deep balls live in Athens, and given Stafford's and the Dawgs' minor troubles in the red zone, it might behoove them to have Stafford try them a little bit more often.

3. Jevan Snead, Ole Miss. (Numbers: 55.2 CP, 1272 yds, 8.3 YPA, 9-9 TD-INT, 132.18 rating.) It's taken all of six games of Snead's Ole Miss career for him to establish himself as one of the SEC's best big-play artists, as evidenced by the sterling over-8 YPA and second-only-to-Tebow TD total. As you'll probably recall, he only completed nine passes against Florida, but those nine passes covered more than 20 yards a pop and were good for two criitcal TDs. Take away one nightmarish outing against Vandy's bona fide secondary and Snead could even boast a solidly efficient 9-5 TD-to-INT ratio.

The problem, of course, is that you can't just "take away" the Vandy game, or Snead's backbreaking mistakes against South Carolina. (For someone with Snead's mobility he's also been surprisingly "meh" on the ground, averaging  only 3.5 attempts per game and less than a yard a carry.) There's a huge gap between Nos. 1 and 2 on this list and Snead, and he'll have to be much more careful to make it up.

Against lesser teams, however, it's been the same ol' JPW that gave Auburn fans reason to stick the "Sarah Jessica" inbetween the J and the P: mediocre against Arkansas, bad against Kentucky, downright hideous (3.2 YPA!) against Tulane. To run the table, 'Bama will need better.

5. Stephen Garcia and/or Chris Smelley, South Carolina. (Numbers: Garcia-65.7 CP, 300 yds, 8.6 YPA, 2-1 TD-INT, 150.86 rating, 4.19 yards-per-rush; Smelley 60.0 CP, 1276 yds, 7.1 YPA, 10-9 TD-INT, 127.88 rating.) For the most part, Smelley hasn't been as bad as advertised; he was outstanding in the road win over Ole Miss and his TD-INT ratio, YPA, and efficiency rating are all perfectly acceptable. His issues are that a) as with Snead, the bottom's dropped out occasionally, including a hideous first half against Kentucky b) Garcia has been every bit as good as advertised. Stretch out those numbers above across an entire season and you're looking at someone who would make a push into that Tebow/Stafford stratosphere. To boot, for several drives on the road against a good Kentucky defense, he looked perfectly capable of maintaining that kind of production long-term. If the same Garcia shows up Saturday against LSU, consider him moved up a couple of pegs. 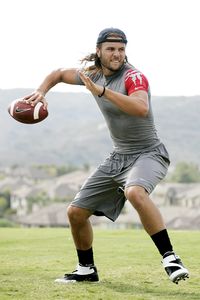 Yes, this is the SEC's great quarterbacking hope for the future. God help us all.

6. Jarrett Lee and/or Andrew Hatch, LSU. (Numbers: Lee-59.1 CP, 852 yds, 7.4 YPA, 8-5 TD-INT, 135.63 rating; Hatch-52.5 CP, 250 yds, 6.3 YPA, 1-1 TD-INT, 108.25 rating, 4.79 average on 24 carries and 2 TDs rushing.) Lee is a kind of lesser version of Snead: several big plays (particularly in the comeback against Auburn), more-than-reasonable level of efficiency, good mobility ... and an apparent penchant for catastrophic mistakes. If Andrew Hatch can complete a slightly higher percentage of his passes and avoid getting knocked slap out of the game on one of his various successful dseigned runs (as he was against Auburn), he might be able to re-challenge Lee for the starting job. In any case, as he showed with Flynn and Perriloux last season, Gary Crowton looks plenty capable of juggiling the two of them.

7. Yes. Casey Dick, Arkansas. (Numbers: 58.4 CP, 1411 yds, 7.2 YPA, 7-5 TD-INT, 119.81 rating.) Those miracle comebacks that kicked off the Hogs' season (and in retrospect likely kept their psyche just afloat enough to withstand the 'Bama-Texas-Florida poundings) were all Dick, and now he's at the helm of an offense that's rolled up the yards two weeks running on stout D's from Florida and Auburn. He still has too many classic Casey Dick brainfarts to rank higher, but he's not just a punchline anymore. (He is still a punchline, of course. His last name is Dick. There's no getting away from it.)

8. Mackenzi Adams and/or Chris Nickson, Vanderbilt. (Numbers: Adams-56.8 CP, 231 yds, 6.2 YPA, 2-1 TD-INT, 121.63 rating, 3.04 yards-per-rush; Nickson-51.4 CP, 311 yds, 4.4 YPA, 3-2 TD-INT, 97.18 rating, 4.34 yards-per-rush on 73 carries, 6 TDs.) Now here's a situation that could probably benefit from experimenting with some of that Leak-Tebow, Flynn-Perriloux type of rotation. Adams has almost without question outplayed Nickson overall to this point, but it seems such a shame to keep a weapon like Nickson's legs on the bench. This neutral would love to see what might happen if Adams (who's an efficient and underrated runner) and Nickson (who does ahve a capable arm) started mixing it up a la Florida 2006--the potential to keep defenses off-balance seems well worth the effort.

9. Tyson Lee and/or Wesley Carroll. (Numbers: Lee-63.4 CP, 547 yds, 5.9 YPA, 2-0 TD-INT, 119.95 rating; Carroll-53.7 CP, 528 yds, 5.6 YPA, 3-6 TD-INT, 98.16 rating.) Carroll built on his safe-but-successful freshman season by throwing away the Louisiana Tech opener, and he never really recovered; the job now appears to be firmly Lee's, and it's little wonder when he's throwing the ball 22 times against Vandy's secondary without a pick. Sure, those 22 passes only averaged  gain of 3.7 yards, but particularly against a lo-fi offense like the 'Dores, that's still the quintessential victorious Bulldog QB performance. Now we'll see if he can keep it up.

10. Mike Hartline, Kentucky.  (Numbers: 55.3 CP, 1026 yds, 4.9 YPA, 5-4 TD-INT, 100.8 rating.) A 5-to-4 TD-to-INT ratio isn't the end of the world in and of itself, but if you're going to average less than five yards an attempt, it's still too many errors for an offense that's trying to play it this safe. Thus the barely-over-100 QB rating, and an offense that hasn't broken the three-touchdown barrier on its own against any D-I school that isn't Western Kentucky.

11. Nick Stephens, Tennessee. (Numbers: 49.0 CP, 406 yds, 8.3 YPA, 3-0 TD-INT, 138.78 rating.) That completion percentage isn't anything to write home about, but when you've played two games in your college career and one of them has been at Georgia, the rest of these numbers are more than acceptable and might even border on "downright encouraging." They haven't translated into drives and points yet--maybe if the Vol staff stayed committed to the run a little longer, it'd help--and of course this is an awfully small sample size. But it's almost certainly enough to keep Jonathan Crompton on the bench for the foreseeable future, and that alone is cause for celebration where Stephens is concerned.

12. Kodi Burns and/or Barrett Trotter (?), Auburn. (Numbers: Burns-40.5 CP, 198 yds, 4.7 YPA, 0-3 TD-INT, 65.79 rating, 3.31 yards-per-rush on 35 carries, 2 TDs; Trotter-n/a) Oh, how this pains me. But as much potential as I (like all Auburn fans) believe the agile, strong-armed, five-star Kodi Burns to have if he can ever cement the job as his own and get some support from the Tiger coaching staff, to this point the scattershot, red-zone-phobic (at least where passing is concerned), poorly-coached Burns is what we have to go on. And in his two years that Burns has never (save the bowl victory over Clemson) been more than a tease. Here's to hoping that changes in Morgantown next Thursday. It might. It might not.

One thing I can assure you you won't see against West Virginia is Chris Todd, and it's extremely unlikely you see him take a snap again this season. This week Tommy Tuberville named junior Neil Caudle and talked-about true freshman Barret Trotter the candidates in a battle for the backup job and a potential crack at playing time if Burns falters. The brief, and brutal, Chris Todd era is as over in Auburn as the era of the offensive coordinator that recruited him.

Verdict: So, yeah, maybe the Big 12 has McCoy, Bradford, Chase Daniels, Zac Robinson, Graham Harrell, Todd Reesing, Robert Griffin, Josh Freeman, and Joe Ganz. But the SEC's third-best quarterback is Jevan Snead! The guy who went 7-17 for 70-some-odd yards and a pick at home against Kentucky is one of our best signal-callers! Does the Big 12 really want us to match up Todd Reesing with Jarrett Lee and Andrew Hatch? I don't think so!

Wait. Maybe they do. I'm not ready to concede, as many are, that the Big 12 has surpassed the SEC as the nation's most competitive conference. But the state of quarterbacking in the SEC isn't exactly a feather in the SEC's cap, either; in fact, I couldn't recall a time this decade when it's been worse. Aside from the top two, every quarterback and/or platoon on this list is "talented-but-inconsistent" at best and "a seeping wound on the flabby, punt-happy buttock that is our offense" at worst.

Let's be honest: this really might be a down year for the conference, and if it is, the list above is where you'll want to start when you go looking for reasons why.