EDITOR'S NOTE: There are eight teams that have reached the midpoint as of this week and not been profiled in Midseason Report. Instead of posting eight separate items and overwhelming the front page, I'm handling the five teams from the East in one post and the three from the West in another. LSU still has yet to play its sixth game; I've previously looked at the first halves of the season for Alabama, South Carolina and Auburn.

There are two puzzling teams in the SEC West this year; one of them is LSU, which coasted through an easy start to the season and then imploded against Florida. 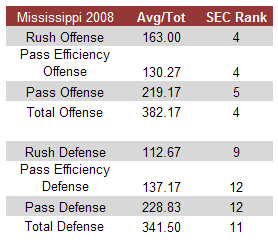 The other is Mississippi, which has looked good even in losing efforts but still holds a 3-3 record.

Even rocking along this way, though, Nutt and his team can still make a bowl. Sure, at Alabama is a likely loss, as is at LSU (we think). But a visit to Arkansas and home games against Auburn, Louisiana-Monroe and Mississippi State are all winnable games. Jevan Snead has played well enough to complement the RB-by-committee. Dexter McCluster is also a valuable player.

The question is whether the defense can hold up. Against Auburn, La.-Monroe and Mississippi State, sure. Arkansas could put up some yardage and make that game close, meaning Ole Miss' margin for error is small. But not too small; Ole Miss will win at least six, maybe seven, and play in December. Mid-December, somewhere north of Florida and west of Georgia. Not bad after the Orgeron.

Let's not overreact to Arkansas' win over Auburn. Your humble correspondent would argue that last weekend's game says more about the Tigers from the Plains than it 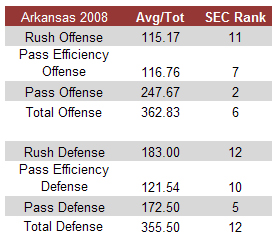 says about the Hogs. Sure, Arkansas is 3-3, but that includes last-minute escapes against Western Illinois and Louisana-Monroe. (By the way, we should just go ahead and make the Warhawks an honorary member of the SEC, if everyone's going to play them anyway.)

It's hard to see Bobby Petrino managing to continue this success and turn the Hogs into contenders. They run the ball effectively at times, but aren't consistent with it. (In fairness to Michael Smith, he's done very well in four of the five games he's played.) They throw the ball a lot and ring up a lot of passing yards, but their opponents can take the lead with efficient passing and then run out the clock with relative ease.

And this weekend begins a stretch that reads: at Kentucky, vs. Mississippi, vs. Tulsa, at South Carolina, at Mississippi State, vs. LSU. Arkansas is just as likely as Mississippi State to be favored in their contest against each other, but only an absolute collapse by one of the other teams will give the Hogs a chance for more than one win from here on out.

Going 4-8 in the first year of a transition from a run-first offense to a pass-first offense can be a good foundation. A lot of people doubt, though, that Petrino will stay around to build on that foundation.

There's a phrase that defines this season for Mississippi State: Reversion to the mean. Simply put, things like luck and extremes eventually even out, and your value 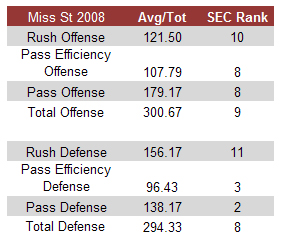 will be what your value should be. (Warning: I am a journalist, not a statistician.)

And the value of the way Sylvester Croom's teams have played since he got to Starville is not very high. This year has not been any different: the Bulldogs rank in the bottom half of the league in every major category on offense, as well as rushing and total defense. As South Carolina proved last year, teams will abandon the pass if they can demolish you with the rushing game, which looks to be what has happened to Mississippi State this year. Granted, new QB Tyson Lee has played decent in the last few weeks, but with the exception of Vanderbilt, the Dogs have lost anyway. Vanderbilt, coincidentally, was the worst of Lee's last three starts.

This is from a head coach who was supposed to be an offense guy. So much for that, and so much for the Croom Era at Mississippi State. The Bulldogs will be favored in one game (vs. Middle Tennessee State), maybe two (vs. Arkansas). At 2-4, that's not good enough to get to a bowl game, and probably not good enough to save Croom's job. Even if it is, it's probably only for a season. It turns out that the mean isn't kind to Sylvester Croom.