EDITOR'S NOTE: There are eight teams that have reached the midpoint as of this week and not been profiled in Midseason Report. Instead of posting eight separate items and overwhelming the front page, I'm handling the five teams from the East in one post and the three from the West in another. LSU still has yet to play its sixth game; I've previously looked at the first halves of the season for Alabama, South Carolina and Auburn. 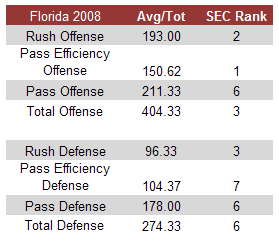 Remember back when people like Gary Danielson were saying that the era of the spread was over, and that Florida was proof of that? That was, oh, a few weeks ago. What a difference a blowout makes.

In fairness, the Gators' 475-yard outburst against LSU is still a season-high for Florida, and could be little more than a good game for UF and/or a bad game for the Bayou Bengals. Florida, though, has also picked up more than 400 yards two more times this season (Hawaii, Mississippi), though not against an opponent of LSU's (perceived) stature. Tebow hasn't done as much running this year, but his passing has been exceptional; his QB rating is 152.85, good for 17th in the country. Jeffrey Demps, Chris Rainey and Percy Harvin have combined to juice a formidable running game. 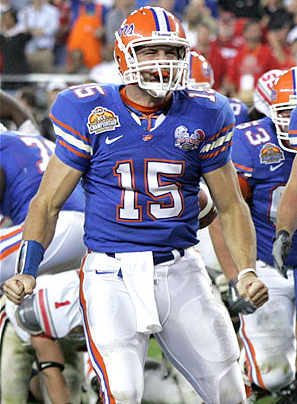 Meanwhile, the defensive issues that plagued Florida last year don't look to be as big a problem this year. The Gators have shut down the run and made opposing passers largely average -- granted, not a huge task in this year's SEC. Gaining 404 ypg a gain and giving up fewer than 275 is generally a pretty solid recipe for success no matter which conference you're in.

Florida's remaining schedule is strong, but not insurmountable. They take on Kentucky at home next week, Georgia at Jacksonville the week after that, and then play at Vanderbilt, vs. South Carolina, vs. The Citadel (!) and at Florida State. It's not impossible to see this team sitting at 11-1 when the season finishes up, and that's probably a good bet. They're the team to beat in the SEC East, and their remaining divisional foes probably won't.

The team to beat this year was supposed to be the Georgia Bulldogs, who came in with Matthew Stafford, Knowshon Moreno and a decent enough WR corps. (This being before the emergence of A.J. Green.) And that has 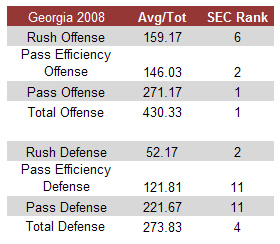 largely panned out, though Moreno was expected to do slightly better than 98 ypg.

Of course, he was going to have an offensive line when the season began. Now, after a rash of injuries that would shock even a frontline Confederate unit, the starting offensive line includes five underclassmen.

The offense, though, has still largely carried its weight. The defense has been another story, especially considering the passing defense. That shouldn't really be a surprise -- this is the team that allowed itself to be carved up by John Parker Wilson, and the numbers aren't made better by early, pass-inducing leads. The rushing defense has been impressive, and you can afford to give up a little more passing yardage when you're holding the opponent to 52 ypg on the ground.

But, no, as it's presently performing, this team probably can't beat Florida, which is all that really stands between the Dawgs and the East. (Sure, LSU could be a tough game -- if the Bayou Bengals don't turn out to be paper tigers.) Second place in the toughest division in football isn't bad. It also isn't what Georgia or its fans had in mind. 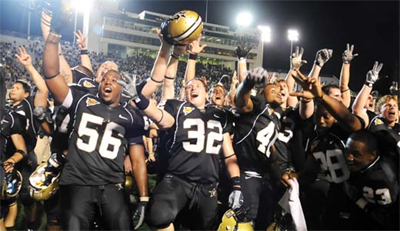 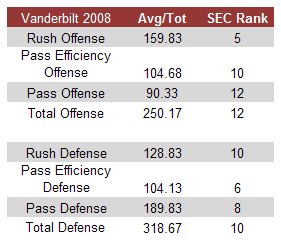 Commodores, overachievers at 5-1 and (so far) credible candidates to win the SEC East. If they can continue a string of luck that makes even Mississippi State's 2007 season look sabermetrically sound.

There is little to recommend this team as a good choice for second-half prognosticators. The rushing offense is average for SEC teams, the passing game is an abomination and the defense is mediocre. And, yes, the Dores have benefited from the opportunistic bounce, as South Carolina can tell you after watching a punt bounce off the leg of a blocker and set up a crucial Vanderbiilt score. And while Ole Miss, Rice, Auburn and Miami (Ohio) aren't chopped liver, they aren't exactly the caliber of team the Commodores are about to face.

But Duke and Tennessee are certainly beatable, and Wake Forest and Kentucky are within reach. Give this team a good shot at 7-5, perhaps, enough to send a team in the middle of a 26-year postseason drought to a decent bowl. A good story -- not a fairy-tale ending.

You would think that a team whose played six games would have presented us with plenty of evidence to make a pretty good guess about how good they are. Then Rich 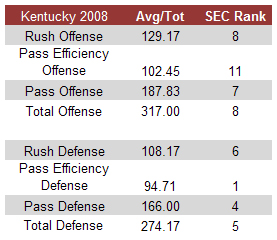 Brooks went to the Bill Snyder School of College Football Scheduling and decided to kick off the season with rebuilding Louisville, Norfolk State, Middle Tennessee State and Western Kentucky.

Fortunately, this trend can't continue for an SEC team, and the Wildcats now have to play schools with, you know, good football teams. The first indications, at Alabama and against South Carolina, were not what Kentucky was hoping for. The offense is erratic, and while the defense is almost as good as advertised, there are only so many games you can win gaining a total of 317 yards.

When you're giving up 274 ypg, though, you're never really out of it, and the Wildcats never have been. And while the slate gets markedly more difficult from here on out, Kentucky still has several winnable games: vs. Arkansas, at Mississippi State, vs. Vanderbilt and at Tennessee. Are they going to beat Florida and Georgia? Probably not. But a 7-5 or 8-4 season and third straight bowl trip ain't bad when you're Kentucky.

What can I say that hasn't already been said? This is a bad football team, and there's no two ways about it. The only question at this point, really, is whether Phil 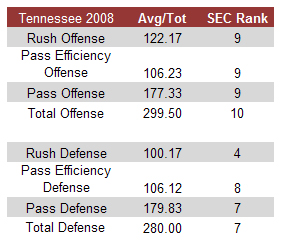 Fulmer will be fired in October, November or December.

If that sounds harsh, just look at the chart to your right. Aside from rushing defense, this team literally does nothing very well. Sure, they're middling against the pass, but that doesn't do much good when your own offensive attack is so anemic. Usually, a winning team does something right on offense. Then again, this is probably not going to be a winning team.

Sure, the schedule lets up a little bit from here on out, but "letting up" is a relative term in the SEC. Mississippi State rolls into Knoxville this week, and no one is going to be comfortable calling that a Tennessee win. Not that the Vols have a better chance against next week's visitor, Alabama, or their host on Nov. 1, South Carolina. Then it's vs. Wyoming (maybe the only sure win left), at Vanderbilt and vs. Kentucky.

Even a rosy scenario, which at this point might be 5-7 (or even 4-8), means this year will not end well for Fulmer. The drama is in when it will end.