Share All sharing options for: Statistical Strength of Schedule

Something I put together last season that I'm doing again is a statistical strength of schedule ranking. The full rationale and national breakdown is over at my home base, but here's the way it works.

Take the average national rank of the teams a school has played so far in four categories: total and scoring offense and defense. Then average those four numbers together to get a score. The lower the score the better. Also, I-AA teams automatically get ranks of 120 in all categories.

Since this is an SEC blog, I'm only going to go over only teams in our fair league. Here's how everything works out: 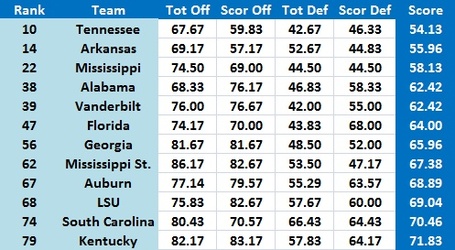 It should come as no surprise that Tennessee ended up first given that they've played Florida, Georgia, and Auburn already. You can see that the defensive scores of the Vols' opponents help them more than their opponents' offensive scores do, and you might be quick to attribute that all to Auburn. However, Northern Illinois is a top-20 team in both defensive categories too while having terrible offensive ranks.

Kentucky brings up the rear despite having played Alabama. The numbers suggest it has more to do with the offenses of the WIldcats' opponents rather than the defenses. The Tide being in the 50s in total offense hurts some, but the dreadful offensive rankings of South Carolina and MTSU plus two I-AA teams (Western Kentucky counts since it's not a full I-A member yet) are an anchor around Kentucky's neck in this regard.

Overall among the BCS leagues, the SEC is behind only the Pac-10 in terms of having the lowest average rank and average SSOS score of the member teams. That is in large part to the schools out west playing conference games earlier, a general lack of playing I-AA schools, and the playing of stat powerhouses like Oklahoma, Penn State, BYU, Georgia, and Utah in the non-conference.

Last season the SEC and Pac-10 dueled all season over which would have the toughest overall schedule before the SEC won in the end. I wonder whether that
will happen again given the offensive struggles within the league this season.

On the positive side, no one in the conference has played a schedule that so far ranks in the bottom 20% of the national rankings. Only UK and South Carolina are in the bottom 40% and they have tough games ahead. Among those who are last in their own respective BCS conferences, Kentucky is the highest in the rankings and is a full ten spots ahead of the next such team, No. 89 Penn State.

You can take this system or leave it, but I think it is easier to understand than some of the complex ones out there while respecting the fact that the best team doesn't always win the game. The NCAA's rankings only look at wins and losses, so a 6-0 MAC team counts the same as a 6-0 SEC team.

Sure this is susceptible to teams like Tulsa, who rack up gargantuan numbers against nobodies, but using national rankings instead of the raw numbers mitigates the effect of outliers some. Plus on the other side, you have teams with murderous schedules that put up lower numbers than they otherwise would.

Feel free to comment on the methodology if you like. Don't worry if you think your team is too low right now; Vandy jumped from 98th in the country in early October to 55th at the end of the regular season, and Kentucky jumped from 43rd to 18th in the same span.

This is just a snapshot of how things have been so far. How they will end up could be dramatically different.