1. What's your prediction for the matchup in the SEC championship game, and has that changed at all from what you were predicting in the preseason?

The original prediction was, um, Georgia versus mumblemumbleauburnmumblemumble, so yeah, it's changed. (In my defense, this was back when Tony Franklin was an offensive genius, LSU had lost 47 All-Americans and Nick Saban was trying to figure out how to make sure he didn't lose to a Sun Belt team two years in a row.)

Now, I'm rock-solid sure that Alabama will represent the SEC West. (Sell Alabama stock! Sell! Sell! Sell!) I don't see anyone left on the schedule who can beat them. Except Arkansas State. Seriously -- you think Mississippi can taken them? Tennessee? LSU? Mississippi State? Auburn? Sure, sure, it's hard to go through the SEC undefeated, but right now Alabama looks like it could. Unless LSU can beat them -- the game is in the Bayou -- or somebody can surprise them, the Tide will roll into Atlanta at 12-0. 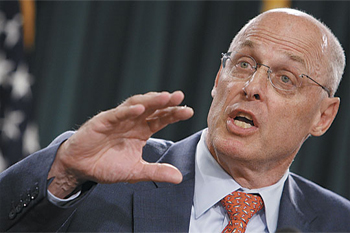 'With cocknfire's endorsement, Alabama will now need a massive bailout to survive.'

The SEC East? Well, we know it will still be the winner of the Georgia-Florida game, but I'm not sure the Dawgs can survive the injuries to their offensive line. LSU and Florida both have to be relishing the idea of putting Stafford on the ground several times.

Yeah, I'm changing it entirely. Florida vs. Alabama. I think.

2. Knowing what you now know about your team, how have your expectations for this season changed? What would constitute a successful season in your eyes, and what would be a disappointment?

(To those who don't know, I'm a South Carolina fan.) A few weeks ago, had you asked me this question, I would have said the goal is seven wins, down from eight at the beginning of the season. But with two consecutive SEC road wins and the emergence of a quarterback who can, you know, throw the ball to receivers instead of to defensive backs and vast, empty expanses of turf, I'm back to at least eight. South Carolina has five in the bank right now, with likely wins against Tennessee and Arkansas and a possible win against Clemson upcoming. If the Gamecocks fall in one of those games, they might be able to upset LSU or (even more unlikely) Florida.

Eight pre-bowl wins would be a successful season in my book, given that South Carolina collapsed down the stretch last year and would have to reverse that trend this year to get to eight. A disappointment would probably be seven wins sans a victory over Clemson and then a loss in a bowl somewhere north of Jacksonville and west of Atlanta.

3. If your team has Vanderbilt coming up at some point on its schedule, are you worried? If not, which team should be the most worried?

The horse has kind of left the barn on that one. In fact, South Carolina's loss should have been when the rest of the league saw the flashing 'WARNING' sign, but several of us (self included) instead chose to believe South Carolina was on its way to another disappointing season. Sure, both could still be true, but I'm guessing not. 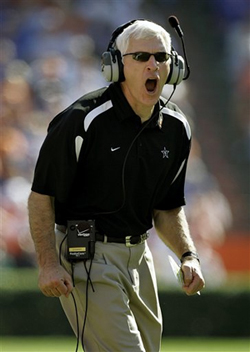 Tennessee should definitely be worried, but that's like saying Duke should be worried, so let's find someone who would be a favorite against the Commodores. That would be Florida. Vanderbilt gets a bye week before hosting the Gators, and they're nicely situated to be a trap game -- between the rivalry game against Georgia and the Oedipal Bowl against South Carolina.

4. Other than perhaps Alabama's season-opening win over Clemson, the SEC doesn't really have any marquee non-conference wins thus far, and a couple of traditional powers (Auburn and Tennessee) are struggling in high-profile fashion. Is it too early to call this a "down year" for the conference?

I hope the conference isn't down, or this blog was a really bad idea.

I'm going to say that it's still too early, but the trend lines aren't going in the right direction. LSU's loss to Florida indicates that there are probably three really good teams in the league -- Alabama, Florida and Georgia. Then, there's a middle realm that includes LSU (far better than anyone else in the medium range), South Carolina, Vanderbilt, Kentucky and Ole Miss. Finally, we have the abysmal bottom of the league: Auburn, Mississippi State, Arkansas and Tennessee.

Now, if LSU, South Carolina and/or Vanderbilt make a surprising run in the second half, they could save the conference's season. Otherwise, it's a down year and -- gulp -- the Big XII might be better.