Share All sharing options for: So Much for Western Supremacy -- Florida 51, LSU 21 and the Rest of Week 7

Was it really just a couple of weeks ago that we were wondering whether the East could reclaim the mantle of "best division" from the West? Because that suddenly doesn't seem like much of an argument anymore.

The East could always point to its depth -- South Carolina, Kentucky and Tennessee have looked slightly better on average than Mississippi State, Arkansas and Auburn. At the top, though, Florida's loss to Ole Miss and Alabama's crushing of Georgia seemed to give the West an edge.

Both of those losses looked to be avenged Saturday by Florida's 51-21 dismantling of LSU. Here, the box score might be a bit deceiving. Florida's edge in total offense was large, but not 30 points large: 475-321. First downs: 22-19. Passing yards: 210-241. But that's what brings us to perhaps our most surprising statistic: Florida shut down the Bayou Bengals' vaunted rushing offense, allowing just 80 yards, while piling up 265 on the ground. Charles Scott was almost unstartable. 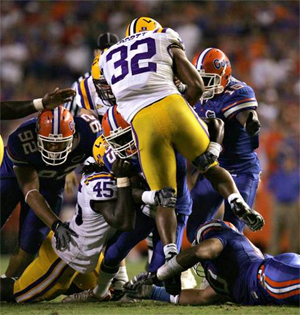 This, generally, is not how you win the Heism@n.

Tebow, meanwhile, was everything he needs to be. Maybe not a Heism@n-level performance, but he was efficient passing, didn't turn the ball over, and orchestrated a dominant offensive performance.

Jeffrey Demps and Chris Rainey, meanwhile, decided to announce their presence to the rest of the country Saturday night. Percy Harvin was able to focus on receiving, and Brandon Spikes bedeviled Jarrett Lee and the LSU wideouts all night, ending up with two interceptions and drawing comparisons to Reggie Nelson. 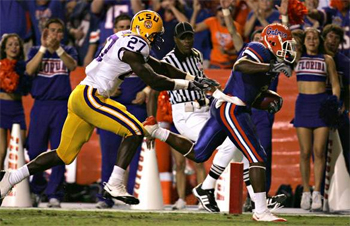 This is about as close as anyone got to Demps.

The onslaught seemed to answer Florida fans' concerns about the offense, if only for a week. But it opened up all sorts of unpleasant questions for LSU, which believed it had found enough offense to win in the SEC. That might not be true.

Alabama didn't play Saturday, but if LSU's performance against Florida is their best effort, then the Tide were the biggest winners of the weekend. Their path to the SEC West crown is now unobstructed.

BUT WE WANTED TO SLAUGHTER THEM
Georgia 26, Tennessee 14

This game was reminiscent of the 2007 edition, only with the roles reversed: Georgia went up 20-7 in the first half -- indeed, the first quarter looked like a blowout in the making -- and then coasted to a comfortable win.

In fact, Georgia's win looks more dominating than Florida's in the box. The Dawgs outgained the Vols 458-209 and had 29 first downs to Tennessee's 10. But perhaps the most alarming number for the Vols faithful, given their heritage, remains in the rushing department: Tennessee picked up 1 yard on the ground. No, that's not a typo. A single yard. Three feet.

Matt Stafford's two interceptions were about all that went wrong for Georgia. Knowshon Moreno broke the 100-yard mark for the third time this season and Mohamed Massaquoi gave flashes of being the All-American on whom everyone's been waiting for about seven years now.

Hey, Vols fans, at least Britton Colquitt came back. Too bad his punts covered more yards than the offense.

This was perhaps one of the most bizarre games of the year so far. Strange bounces, odd turnovers, blocked kicks -- the first half looked like something out of an alternate universe. Or maybe that was just South Carolina and Kentucky, playing out another one of their sloppy battles for fourth place in the SEC East.

Both offenses struggled in the first half, and even into the second. By the time Chris Smelley led South Carolina to two consecutive three-and-outs in the 3rd quarter, though, Steve Spurrier had seen enough. Stephen Garcia stepped in, replacing Smelley's erratic throws with pinpoint strikes and scrambling to first downs where Smelley had scrambled into fumbles.

Kentucky clearly misses Andre Woodson and Rafael Little. The vertical game was there, but barely, and neither the Gamecocks nor the Wildcats could ever get their running game going.

There was an opportunity here for one of these teams to send a message that the battle for the SEC East is not yet a three-team race. Neither did.

THE ROAD TO NO. 6 GETS A LITTLE LONGER
Mississippi State 17, Vanderbilt 14

What's waiting another week to become bowl-eligible when you've already waited 26 years? Well, it could be more than a week, really.

Having been defeated by the West Division Bulldogs, Vanderbilt now goes to Athens to face the East Division Bulldogs, then faces a resurgent Duke for homecoming. A bye, then Florida, at Kentucky, Tennessee and at Wake Forest. So it still seems like a question of when, not if, Vanderbilt will get that elusive sixth win. But the seventh is now just likely instead of foreordained, and it's getting harder to find the eighth and ninth.

All that said, this is still a troubling loss for Vanderbilt. It was not a classic CROOMing. Mississippi State outgained the Commodores, 247-107, and got more than twice as many first downs (16-7). Mackenzi Adams and Chris Nickson both threw a pick and Mississippi State shut down the running game. MacGyver football can only take you so far.

IT'S ALL DOWNHILL FROM HERE
Arkansas 25, Auburn 22

To tell how terrible Auburn's offense is even sans Tony Franklin, consider this: the Tiger's 22 points scored against Arkansas (aided by the Hogs' intentional safety) were the fewest points scored against the Fighting Petrinos this year. Western Illinois scored 24 and Louisiana-Monroe, 27. Franklin wasn't the only problem here, and getting rid of him won't magically fix things.

At this point, neither of these teams is really doing anything other than playing out the string. Auburn could get to seven wins, but that's not what the Tigers were supposed to be playing for this year. And Arkansas -- well, the rest of their schedule goes at Kentucky, Mississippi, Tulsa, at South Carolina, at Mississippi State, LSU. Given Mississippi State's win this weekend, Arkansas still might not be favored again all year.

At least they got an upset to remember. And Bobby Petrino might have finally gotten the last laugh over Tommy Tuberville.