Share All sharing options for: MIDSEASON REPORT: Thoughts on Auburn

We've already covered the main story with Auburn -- that being its dreadful offense -- here, here and here, so the midseason report won't be very extensive.

But as Auburn takes the field in a game they could lose, it's worth looking at the rest of the Tigers' schedule and what it could mean for 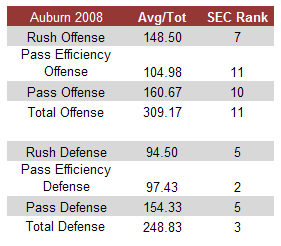 their program. And there are troubling signs there; Auburn has stumbled against maybe the weakest half of the Plainsmen's schedule. Things get no easier from here.

Even if they get past the Hogs, the Tigers still face back-to-back road games against disappointing West Virginia and befuddling Ole Miss. After a breather against Tennessee-Martin, Auburn hosts Georgia and then travels to Tuscaloosa. So it's not hard to see Auburn ending the year 7-5, 4-4 in conference play, and 6-6, 3-5 are not out of the range of possibility. Either would mark the Tigers' worst overall record since 2001 and worst SEC record since Tuberville's first season in 1999. At which point you have to believe Bobby Lowder would be fueling up the plane.

Auburn fans are fervently hoping, of course, that Tony Franklin's dismissal will turn things around offensively. It better. Or Franklin might not be the only one getting his walking papers.